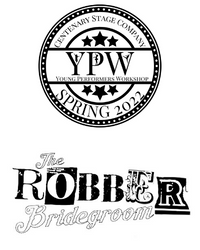 A rousing, bawdy Southern fairytale from the Pulitzer Prize-winning author of Driving Miss Daisy, Alfred Uhry! The score, by Robert Waldman, is meant to be played by a small band onstage – and it's one of the only genuine bluegrass scores ever heard in a Broadway musical. Since opening on Broadway in 1975, The Robber Bridegroom has gone on to become a regional favorite.

Set in eighteenth-century Mississippi, the show follows Jamie Lockhart, a rascally robber of the woods, as he courts Rosamund, the only daughter of the richest planter in the country. The proceedings go awry, however, thanks to a case of double-mistaken identity. Throw in an evil stepmother who's intent on Rosamund's demise, her pea-brained henchman and a hostile talking head-in-a-trunk, and you have a rollicking country romp.